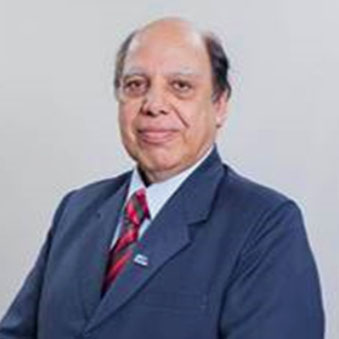 Prof V N Attri is Chair, Indian Ocean Studies (CIOS), Indian Ocean Rim Association (IORA), University of Mauritius, Mauritius. His policy briefs have been published in United Nations Global Sustainable Development Reports (2015, 2016). He is former ICSSR Senior Fellow, Government of India, and New Delhi. He has been a visiting scholar at University of California, Los Angeles, CA, USA and Visitor at the George Washington University, Washington DC, USA. He is a lead editor with the Human Sciences Research Council (HSRC), on the Blue Economy Handbook. The CIOS has initiated the quarterly Online Journal of Indian Ocean Rim Studies (JIORS); the first issue of the journal was published in May 2017. He is on the editorial board of many international journals. He has participated in IORA’s Core Group Meetings and First Ministerial Conference on the Blue Economy. He participated in the 2nd Blue Economy Summit, “One Ocean, One Future,” in January 19, 2016, UAE. He is engaged in creating a network of scholars among IORA Member States and Dialogue Partners on the Blue Economy. He has completed “The Study on Bilateral and Regional Trade and Investment related to Agreements and Dialogues between Member States”, October 2017. He has been acknowledged by The World Bank as an expert on Blue Economy and was invited to make an external review of the report, “Toward a Blue Economy: Pathways and Prospects for Bangladesh’s Investment in Sustainable Growth” (March 2018). He has been invited to participate in the “United Nations Expert Group Meeting on Exponential Technological Change, Artificial Intelligence, Automation, and Their Policy Implications for Sustainable Development”, Mexico City, 26-27 April 2018. The CIOS was invited by Virtual Educa to participate in the XIX Virtual Educa International Symposium/ Global Forum on Education and Innovation, 4-8 June, Salvador de Bahia, Brazil. The CIOS participated in the session “Our Ocean Economy: The role of Education in Transitioning to a Blue Economy” and delivered a presentation at the global symposium on “The Role of Higher Education in Transitioning into Blue Economy: A Case of Indian Ocean Region.” Participated in the 5th Indian Ocean Dialogue (IOD) from 1-2 August 2018 in Durban, South Africa. The CIOS participated in the Second IORA Renewable Energy Ministerial Meeting, Delhi, India, 3rd to 4th October 2018 and made a presentation on ‘Global and IORA Renewable Energy Scenario in 2050: The Need for International Cooperation.’ The CIOS participated in High-Level Conference on Sustainable Blue Economy in Nairobi, Kenya, 26-28 November 2018 and delivered presentations on “New & Emerging Investment Opportunities under Sustainable Blue Economy” and “Cities, Tourism, Resilient Coasts & Infrastructure.” On the invitation of India as coordinating country for Disaster Risk Management, the CIOS participated and delivered a keynote address on ‘Artificial Intelligence in Disaster Risk Management’ during the DRM Cluster Group Meeting, 5-6 February 2019, New Delhi, India.

Thus, the CIOS is making significant contribution for the understanding and implementation of the Blue Economy in the Indian Ocean Region (IOR) as well as at the global level by focussing on the Sustainability principles; climate change and natural capital accounting framework; the role of accelerated technological change in developing new and emerging Blue Economy paradigm as well as how to evolve an inclusive Sustainable Blue Economy for enhancing the growth and employment generation at national, regional and global level.

“Sustainable Blue Economy Paradigm” – and its evolutionary process and origin goes back to 1950s and even earlier; but its emergence as a “Disciplinary Matrix” is a recent phenomenon, beginning in April 2010 with the publication of the book “The Blue Economy: 10 Years, 100 Innovations, 100 Million Jobs” by Gunter Pauli in which he laid emphasis that a “Blue Economy business model” will shift society from scarcity to abundance “with what is locally available”, by tackling issues that cause environmental and related problems in new ways. In the book, he discussed twenty-three principles of Blue Economy and establishes that nothing is waste in nature; and by focussing on research in Science- especially in Marine Science, the scarcity may be turned into abundance- and this leading to productivity growth and employment generation in the society. It will also pave the way for inclusive society including women economic empowerment.

The period from March 2019 to March 2023 is full of the conference at the global level- including United Nations high level conferences as well as conferences at continent and national levels with issues related with Sustainable Development which include: Fourth Session of the UN Environment Assembly (UNEA-4) with a theme “Innovative Solutions for Environmental Challenges and Sustainable Consumption and Production”, 11th– 15th March 2019, in Nairobi, Kenya. Prior to this, on 26th– 28th November 2018, in Nairobi, Kenya, Sustainable Blue Economy Conference (SBEC) in which 184 countries and over 18,000 delegates participated, set the future agenda of Sustainable Blue Economy through the major outcomes such as the need to promote action-oriented global strategies that places people and the blue economy resources at the centre of Sustainable Development; promote collaboration for sustainable partnerships and projects in the various sectors of the blue economy; mobilize finance from the public and private sources, promote access to technologies and innovations, share the best practices, capacity building; promote gender equality, the role and participation of women and youth in the blue economy; strengthen science and research to generate and disseminate evidence-based knowledge and information as well as to inform policy and decision making; strengthen governance mechanisms; and promote synergies within and between different levels of governments.

The keynote address will focus on the origin and evolution of Blue Economy, its conceptualization, definitions, principles; and its economic contribution to the global GDP and employment; the role of Marine Sciences as a key to promote Blue Economy; issues related with environmental protection; efforts undertaken by the United Nations; different international agencies and organisations such as The World Bank, World Wildlife Fund (WWF); and Food and Agricultural Organisation (FAO) and other regional economic groupings such as IORA, ASEAN, SADC, EU, OECS etc. in propounding and evolving Sustainability Principles; Ocean Governance as well as Blue Economy financing; major challenges of Blue Economy and their solutions and the contribution of the Blue Economy for promoting growth and employment at national, regional and global level; the inclusive Blue Economy; the governance of high seas, UNCLOS; Natural Capital Accounting Framework as well as Accounting Framework for estimating the contribution of Blue Economy to the Gross Domestic Product (GDP) of the developing economies, emerging economies as well as Small Island Developing States (SIDS) and Least Developed Countries (LDCs). The keynote address will also focus in assessing the overall potential of the Ocean Economy (OE) to contribute to Mauritius’ development, and identifying key sectoral and cross-cutting challenges to be overcome in order to seize that potential; and evaluating ways to ensure the OE’s longer-term sustainability. Thus, the keynote address will try to cover almost all the major opportunities as well as challenges and the way to solve the problems related to Sustainable Blue Economy.