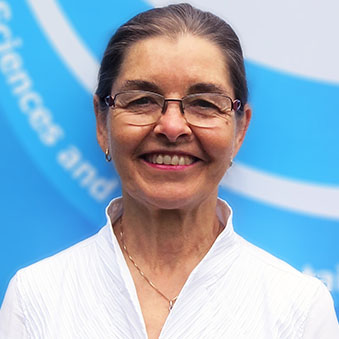 Cornelia holds a PhD in fisheries science/marine ecology from Kiel University, Germany. She worked in FAO’s Fisheries Department, and, since 1986, in the development cooperation department and later in international science cooperation of the European Commission. Since 2010 she heads the international non-profit association Mundus maris – Sciences and Arts for Sustainability, registered in Belgium. Mundus maris seeks to combine scientific concepts with participatory research, arts and practice embedded in local, mixed and global cultural spaces in Africa, Europe and elsewhere. She is also chair of the Board of Trustees of the scientific non-profit Quantitative Aquatics, Inc., based in the Philippines. Q-quatics maintains and develops such global biodiversity databases as FishBase and SeaLifeBase. Her current research interests focus on sustainable small-scale fisheries (SSF), including the essential gender dimension. She supports the implementation of the SSF Guidelines as part of the Sustainable Development Goals of the UN. She sees critically engaged science and arts as among the most promising approaches to support transitions for sustainable living, thus supporting active participation of citizens, private and civil society organizations as well as governments at various levels.

Ancestral conservation roles of women and high social status in many traditional societies, has given way to still prevailing patterns of unrecognised, unpaid and largely invisible work of women in many contemporary fisheries. Thankfully, gender roles attract a slowly growing attention in research and management. The evidence about roles of women in these documented fisheries suggests that, although their labour and managerial contributions are often substantial, widespread denial of social recognition keeps their contribution largely unacknowledged and unaccounted for. Women are typically most active in the postharvest sector, but also in net mending, preparation of bait and management of family affairs, while the men are at sea. The work patterns of women are remarkably similar across very different social systems and degrees of economic development of their communities or countries. The evidence points to an inverse relationship between health of the resources and status of women in the value chain. Towards the “end of the line”, extra-effort expended by women, including paid labour in administrations, renting rooms or other income-earning activities serve to keep their men in fishing despite declines in the resource. This can easily lead to social dumping and perversely enable further overfishing. Often, as a last resort to ensure access to food and/or secure some additional income, women go fishing themselves or glean seafood from coastal flats although seafood gleaning and the like seem to be globally on the decline. Lack of access to technical advice, new technologies, social services and credit are recurrent obstacles for women to maintain or regain status and income within the sector and command the deserved respect as citizens in public and private lives. Conversely, where such access is offered as a matter of policy or e.g. thanks to projects, women have not only advanced economically, but also acquired respected leadership positions in professional organisations and in communities. The talk will elaborate on the results of this meta-analysis based on case material. It will explore opportunities afforded by the political consensus about Agenda 2030 with its 17 interconnected Sustainable Development Goals (SDGs), and in particular the implementation of the Guidelines for sustainable and prosperous smallscale fisheries. These are part of SDG14 and specify gendered measures. It is most fitting for the UN to pay heed to the Zeitgeist and work towards gender equity by choosing “Gender and Ocean” as the key theme of this year’s World Oceans Day (8 June).